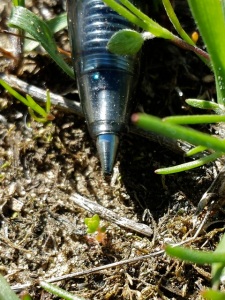 Here is a tiny, innocuous plant that is widespread throughout California but is verrrry easy to overlook. Diminutive sand pygmy weed (Crassula connata) only grows a few centimeters tall; usually 2-6 cm, and 10 at the most. It’s in the same family with larger succulents such as dudleya–just much smaller. Its leaves are tiny fleshy nubs that can be either green or red, and rounded or acute. The innocuous flowers are shorter than the surrounding sepals, which can be hard to distinguish from the leaves. True to its name, look for this little succulent growing in loose, sandy, or gravelly soils–often where not much else is growing.

Filed under Plant of the day