Plant of the day: stinging nettle 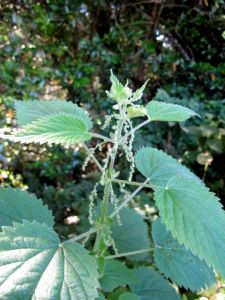 Stinging nettles are a common denizen of the shady forest. These tall plants have heart-shaped leaves with jagged edges like the edge of a bread knife. Though seemingly delicate, Urtica dioica packs a hidden weapon: stinging hairs that give a painful bite to the bare skin of any unwary passersby.

But these plants are friend as well as foe. They are tasty as a tea, in soup, and also as an addition to one of my favorite fancy cheeses. Nettle wine is still being made. Even brief exposure to heat destroys the sting, but some actually seek it out–a British nettle eating competition is a vivid example. One winning contender ate the leaves off 48 feet of stalks! I don’t recommend trying this. But I can vouch that a tea made from the fresh leaves is delicious. Collect them using a plastic bag or gloves, and simply pour boiling water over them in a cup. The water turns a dark green with a rich flavor, and when you drain your cup the leaves can be eaten as well. The plant contains large amounts of chlorophyll, and is a natural source of magnesium, iron, and calcium. Plus it’s delicious!

Nettles have had many uses besides food over the centuries as well. The fibrous plants are great for textiles–they have been made into shrouds, sailcloth, rope, silk-like fabric, and military uniforms.

Stinging nettles are native to Europe, Asia and also North America. There is another, less common type of nettle as well. Dwarf nettle is low growing, less than 1.5 feet tall as opposed to stinging nettle which grows 3 to 10 feet tall. Also, it isn’t native to California.

One response to “Plant of the day: stinging nettle”