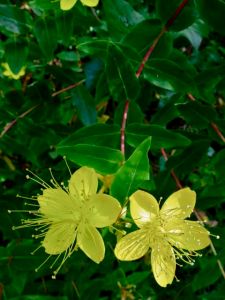 Yellow flowers and myriad long, wild stamens deck this creekside bush. Here is a St. John’s wort–Hypericum grandifolium. It looks out of place along a not-very-remote trail, and upon looking it up later I realize that impression was spot on. There are several species in the Hypericum genus dubbed St. John’s wort, of both native and non-native varieties. I happen to have stumbled across what is really a slightly misguided garden plant. The CalFlora database only lists two observations in the state!

There are several other species of Hypericum that are much more common that you can keep an eye out for. All will have similar flamboyant yellow flowers. Possibly the most common is Hypericum perforatum, a low-growing shrubby plant that naturalized from Europe. It has long been used as a medicine in homeopathy, naturopathy and traditional remedies. It is acclaimed for having antibiotic and antidepressant properties, and for soothing nerve pain. The plant’s compound hypericin is said to inhibit HIV.