Plant of the day: cape weed 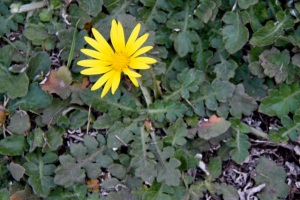 A coastal bluff is carpeted with a mat of yellow daisies. The leaves are grayish green, woolly, and shaped like deeply lobed arrowheads. The flowers are bright yellow, blooming a few inches above the rosette of leaves.

This is cape weed, or Arctotheca calendula, an invasive species introduced from South Africa. It spreads via underground stems called stolons, as well as by seed. It has often been planted as an ornamental because of its flashy flower and long blooming period, but ecologists discourage this because of its tendency to invade delicate coastal prairies.

Traditionally, cape weed was considered to be one species but it is now actually identified as two separate species–the fertile Arctotheca calendula and infertile (or, rarely fertile) Arctotheca prostrata which can only reproduce via stolon and not by seed. The leaves of the infertile species, prostrate cape weed, are either entirely yellow on their underside–or they are tinted a reddish to brownish hue on the outer half of the leaf. The petals of the fertile, “standard” cape weed are a steely blue color underneath.

Filed under Invasive, Non-native, Plant of the day