Plant of the day: saltgrass 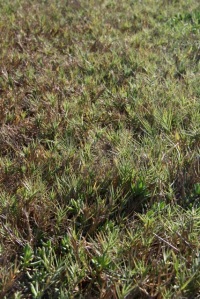 From far away, the edges of the marsh appear to be covered in a herringbone pattern of green and brown. This is actually a carpet of low-growing saltgrass (Distichlis spicata). Bunched into mounds or swept smooth by the outgoing tide, this is a beautiful and distinctive plant of the salty intertidal places. The leaves are flattened and create a dramatic geometric pattern as they alternate up the stem: wedge-shaped leaves offset by the space that they define. The effect of a single stalk is nice, but usually it is magnified by the thousand since this creeping, rhizome-forming grass tends to grow in dense colonies.

Saltgrass can stand being submerged in sea water and so it will often be one of the only plants growing along the tideline. I’ve sat along the shore of Tomales Bay and watched as the water creeps in or out, clambering farther up each leaf blade with each incoming wavelet. It’s a beautiful sight–and happens a lot faster than you might think!

Native tribes of California made a seasoning from the plant, threshing it to harvest the dusky-green salt crystals that coalesce on the leaves (and reputedly have a flavor rather like that of dill pickles).

One response to “Plant of the day: saltgrass”