Plant of the day: California polypody

Small ferns trace patterns on the side of a house-sized boulder. This is California polypody (Polypodium californicum), which spreads by creeping rhizome. It can appear in small clusters, but it isn’t uncommon to find in dense patches carpeting cliffs, hillsides, and canyon walls. The pinnae of each frond are broad and seem to connect at the base, giving the leaf a distinctively chunkier look than most other ferns. California polypody looks a lot like its cousin, licorice fern, but its pinnae are generally rounded at the tips instead of being pointed (click here for a picture of licorice fern leaves).

An infusion made from the rhizomes was used by Native Americans to treat rheumatism, as an antibiotic and to wash sores and wounds. Unlike its anise-flavored cousin, California polypody is “bland or acrid” according to the Jepson manual. It grows from the central Coast ranges south into Mexico. 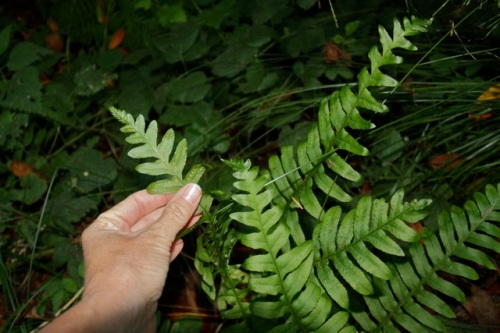