Plant of the day: croftonweed 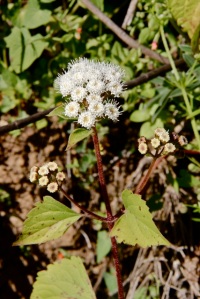 This tuft-topped weed is thriving in the roadside ditches above the ocean. Croftonweed (Ageratina adenophora) )is an invasive, introduced from Mexico that has spread throughout California’s coast ranges. It reproduces asexually as well as through its abundant seeds, and is particularly aggressive in a coastal habitat. It’s considered a noxious weed in Asia, Australia, New Zealand and Hawaii.

It was originally introduced to California as an ornamental plant. In Marin County, you can see a lot of it growing along Panoramic Highway above Stinson Beach.

Filed under Invasive, Native, Plant of the day