Plant of the day: chaparral pea 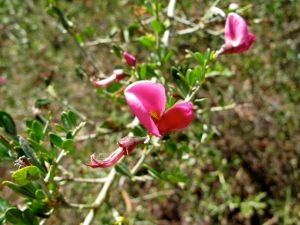 At first glance, the chaparral pea looks like a French broom… with bright pinkish-purple flowers. But this pretty bush is a California native. Pickeringia montana has medium-sized flowers and three-leaftleted leaves that are a shiny, vivid green. It can grow to more than six feet tall, and sprawls a little – just like broom does. But if the color and the shiny leaves weren’t enough to convince you that this isn’t a broom, then the thorns might do the trick! So watch out for it when you’re hiking.

It’s often found (as the name suggest) in the chaparral. Black-tailed deer love to browse on it, delicately nibbling their way around the thorns. This pretty shrub doesn’t reproduce well by seed in this area, but it does spread by rhizomes (spreading underground stems) or from its own roots. It comes back strongly after a fire has burned through.

Plant of the day: Scotch broom

This is another badnasty invasive broom species that you’ll see frequently throughout the Bay Area. Scotch broom (Cytisus scoparius) has pretty yellow pea-like flowers and long, narrow leaves that press closely against its multi-sided stems. Though it occasionally has some rounded leaflets as well, the overall lean, linear look to its foliage makes it easy to tell from its French broom cousin that I wrote about a few weeks ago.

In California, French broom is a nastier problem than Scotch broom, but throughout the rest of the country the Scottish Cytisus scoparius is the worst broom around. Even worse, both were deliberately originally introduced as ornamental species!

This plant is so nasty because it is hearty and vigorous, and spreads fast because it produces a LOT of seeds. A single Scotch broom plant can live for up to 7 years, and produce over 150,000 seeds per year. It’s a mind-boggling number! The seeds stay in the ground, ready to sprout, for between 5 and 30 years. These plants grow up to 12 feet tall and smother any native plants that would otherwise have grown where they are. There’s no sharing if you’re a broom species! Scotch broom is a rampant invasive across much of the western and eastern seaboards of North America – from Alaska to Baja and from Maine to Georgia, as well as in other countries like Australia and New Zealand. It’s native to northern Africa and parts of Europe.

There is one more broom species that you might see in the area, and that’s Portuguese broom. It’s not nearly as common, but it does cover about 65 acres in the Marin Headlands where it was planted in the 1960s as part of a landscaping and slope stabilization program – another good idea gone wrong! Portuguese broom looks a lot like Scotch broom, except the seed pods are inflated instead of compressed around the seeds. Also they have 8-10 sided twigs, as opposed to the 5-sided twigs of Scotch broom.

Filed under Invasive, Non-native, Plant of the day

Plant of the day: French broom

I remember when I was a kid, and first learned that the pretty yellow-flowered bushes I saw all over were bad for the environment. It was probably my first ecological lesson, and I was heartbroken. Their sunny color had always made me happy when I looked out the window on family drives. How could I have been so wrong?

Since then, Genista monspessulana has only become more common. You can see it filling the understory of forests on Mt. Tam, or spilling over the cement retaining walls along roadsides. This highly invasive plant is native to the Mediterranean and the Azores, and was brought to California in the 1800s — probably as an ornamental for gardens. It really is quite pretty. But it also is what scientists call an “ecosystem disruptor” because it wreaks havoc on the native plant communities. It forms dense stands up to 16 feet tall, under which nothing else can survive. All the delicate flowers, grasses and even hardier shrubs perish in its shadow. Livestock don’t even like to eat it. Broom is like an ecological bulldozer, taking diverse habitats and leaving a barren landscape in which it is the only survivor. A single plant has been found to produce over 30,000 seeds — and the seeds live for decades in the soil, waiting for a disturbance like digging (or pulling a grown plant out by the roots) before they sprout. It also is a fire danger, growing tall and tinder dry. Can you tell how I feel about this plant? It’s a nightmare. If you have it on your land or in your neighborhood, get rid of it!! Quick, before it spreads!

Filed under Invasive, Plant of the day