Plant of the day: salty Susan

Nestled among the pickleweed are patches of grayish-green plants with bright yellow flowers. This fleshy-leaved little aster is Jaumea carnosa  (also known as marsh jaumea or salty Susan), and the patchiness is because it spreads by rhizome, or underground stem. Jaumea is common in the upper reaches of salt marshes along the Pacific coast from California to Canada. It’s affinity to the sea is a strong one: you won’t find it growing above 16 feet in elevation!

Even though Jaumea stands out as one of the comparatively few plants that grow in salt marshes, there’s not much information on this little plant. As far as I can tell, it’s not edible and hasn’t got any significant cultural or historical uses. It’s just an upstanding citizen that likes to grow at the upper edge of the tide, quietly going about its business of flowering and photosynthesizing. 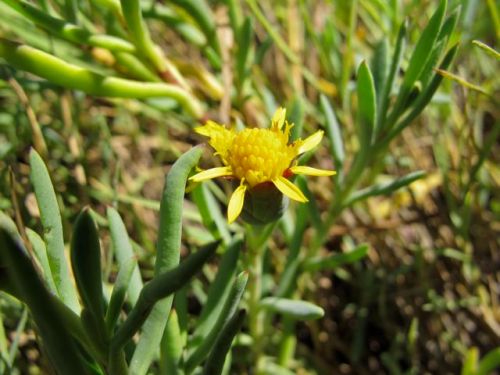