Plant of the day: fringe cups

The petals of fringe cups (Tellima grandiflora) look like they have been trimmed back into a geometric design, like a paper snowflake. The flowers of this common and lovely little blossom grow in a densely packed spike, and can be greenish-white or pale red. They tend to grow in shady forest, where the slightly translucent petals catch the light beautifully.

There are a few medicinal uses listed for the species in the Native American Ethnobotany Database. It’s a short but entertaining list: a decoction of the the pounded plant was taken to restore the appetite, or to treat “any kind” of sickness. Lastly, the Nitinaht tribe of Vancouver Island reportedly chewed the plant “as medicine to stop dreams of having sexual intercourse with the dead.”

Fringe cups  grow on moist, rocky slopes and in shaded forest across the west, from California to BC and Alaska.

Plant of the day: canyon larkspur 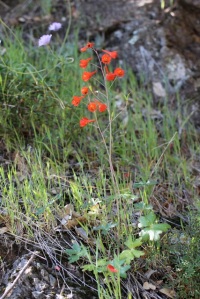 The brilliant red of canyon larkspur seems to glow in the shade of a rocky hillside. Also known as red larkspur, the color of Delphinium nudicaule flowers is so intense that it nearly vibrates. Each little flower tapers to a point in the back; an artists’ rendering of a gnome’s cap or the cowl of Little Red Riding Hood’s cape.

Red larkspur tends to grow most prolifically on shaded, rocky slopes. It is found across much of Northern California, and is not to be confused with scarlet larkspur–which grows farther south and has plants with more densely clustered flowers. It’s the only red larkspur in the area (though there is one yellow-flowered species, and several that are blue, white, or purple). According to the Marin Flora, this species has been found to hybridise with the blue-flowered coastal larkspur, creating offspring that are coral, lavender or purple.

All parts of the plant are highly poisonous–don’t eat it! 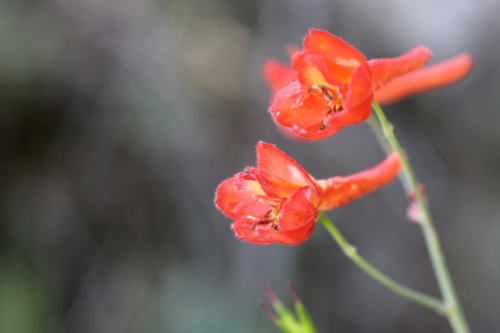 Plant of the day: Pacific trillium

Three green leaves surround three white petals surround a cream-colored, three-parted pistil–each part offset from the other to form a lovely pattern. The whole thing sits perched atop a slim stalk like an elaborate parasol. This large, striking flower is Pacific trillium (Trillium ovatum, also known as wake robin). Ankle-high groves of it are in bloom along the steep ravine trail on Mt. Tamalpais; a stunning sight beneath the towering redwoods: beauty above and beauty below.

This low-growing perennial thrives on shady hillsides and other places that stay moist but are well drained. Trillium is a member of the Melanthiaceae (the false hellebore family, which is a close relative of the lily family) and like lilies it has all of its parts in sets of three, including six yellow stamens. The white flowers turn purple as they age. Each year a fresh stalk sprouts from an underground rhizome.

The plant was used medicinally by various Native American tribes, but only externally–as far as I can tell. An infusion made from the roots was used as a wash for sore eyes, and to treat boils. The Skagit considered it poisonous.

Trillium has also been used as a love potion–the Makah tribe would apply a poultice made of pounded roots as a love medicine; unfortunately my reference doesn’t say what the desired result is, or where the poultice is applied.

Filed under Good for gardens, Medicinal, Native, Plant of the day, Poisonous

There are some of us who love meandering along trails, looking closely at flowers and foliage, debating taxonomy. We are a small but enthusiastic subset, it’s true–but what fun to be with folks of similar mind!

Last weekend I tagged along with the Marin chapter of the California Native Plant Society. Our hike rambled out through the serpentine chaparral of Carson Ridge, then down into a peaceful valley to admire Carson Falls.

This hike showcases the wealth of nature in Marin–there are undeveloped hills and valleys spreading as far as the eye can see, in all directions but south-east, where the Bay and its surrounding cities shine like gems. It’s amazing to think that the vast landscape we were hiking into is protected–mainly, where we were, by the Marin Municipal Water District. But MMWD land abuts County open space, State Park land, and National Parks as well, forming a great swath of public land, free for both wildlife and people.

It was not a fast hike–but that is how I like it. There was plenty of time for photos, and I learned a lot, both from my highly knowledgeable fellow hikers and from our adept leader Amelia Ryan (who, in full disclosure, I’ve been friends with since I was six). The sun was shining, scenery was beautiful, the falls were lovely, and the company was good. What a treat.

Plant of the day: scouring-rush horsetail

A tangle of plants like tall, green soda straws stick out of the ground on the same stream bank where yesterday’s wild ginger grows. This is scouring rush horsetail, Equisetum hyemale. It’s a cousin of the more common giant horsetail, which looks like an oversized bottle brush with wiry arms that stick straight out from a slim central stalk. But instead of looking brushlike, scouring-rush horsetail is unbranched; it consists solely of a tall, single, hollow stalk. It can grow up to nearly 7 feet tall, always in a dense cluster, spreading throughout the area by slim black rhizome.

The stems of scouring rush are remarkably tough–if you try to break one off you’ll find it unexpectedly hard to do. Equisetum’s flexible strength is due to silicon dioxide, and native Americans used it to polish wood such as canoes, bone tools, soapstone pipes, arrow shafts, and fingernails, or to make mats and baskets; later, settlers and 49’ers used it to scrub their pots and pans. Kids used it as a whistle, and the strawlike stem was used as a straw, particularly to give medicine to infants and others.

The roots and young spring shoots were sometimes eaten; but large quantities are toxic due to the silica.

Filed under Good for gardens, Medicinal, Native, Plant of the day

Its easy to tell if you’re looking at a gum plant. All the different species have big yellow daisy-like flowers perched atop a green nub that is studded with fleshy hooks. Before the young buds bloom they ooze a white sap that looks exactly like fresh Elmer’s glue.

San Francisco gum plant (Grindelia hirsutula var. maritima) only grows near the coast, on hills and bluffs from Marin to Monterey. I spotted these specimens on a recent hike to Chimney Rock on Point Reyes. Distinguish this plant from its cousin, coastal gumplant, because it grows on the hills instead of the salt marshes–but mainly because it doesn’t have perennial woody stems. San Francisco gum plant can vary dramatically in size, from 8 inches to nearly 5 feet. The plants I saw had hairy leaves, but according to the Marin Flora the leaves are usually hairless (aka “glabrous” in botany-speak).

Surprisingly, the Elmer’s glue doesn’t seem to have had any historical uses (that I’ve been able to unearth). But the dried leaves and buds were used to treat bronchial conditions including asthma.

Though there are three different species listed in the Marin Flora, it’s worth noting that some experts think that they all are actually part of the same species, Grindelia hirsutula.

Filed under Good for gardens, Medicinal, Native, Plant of the day

A delicate parasol of tiny white flowers is punctuated at the center with one that is dark purple. This is Queen Anne’s lace, or Daucus carota.

Though the plant looks a lot like poison hemlock, Queen Anne’s lace is actually edible–its other name is wild carrot. The roots are eaten cooked, or roasted for a coffee substitute, while the seeds are used as a flavoring. I personally have been too squeamish to try it, though the subtle details of the two plants are very different. First there is the central purple bloom. Second, wild carrot has a green stem stippled with hairs (while poison hemlock has a mottled and whitish stem).

This non-native plant is native to Europe and Asia.

Plant of the day: seaside daisy 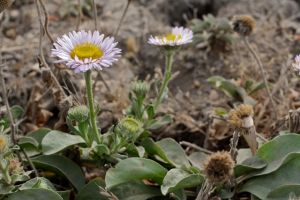 This pretty purple daisy prefers excellent views. It grows along the coast, often clinging to rocky cliffs or sunbathing on sandy beaches. I photographed the ones shown here on the Point Reyes Peninsula, growing on the top of Arch Rock–a lovely vantage point looking down on the long stretch of coast to the north and south.

Seaside daisy (Erigeron glaucus) has rounded, grayish green leaves that are soft to the touch. The flowers heads are purple, ranging towards white or pink, with a yellow center. It’s native to California and Oregon, and it’s often seen in rock gardens as well as in the wild. Other names include beach daisy and seaside fleabane.

Plant of the day: California rose

This wild rose is a favorite sight in spring and summer, as pink blossoms give way to ripe red fruit. This is the California rose (or as it is conversely known in Latin, Rosa californica), which grows in nearly every county in California, as well as in parts of Oregon.

This hardy shrub can look scraggly, but also can be groomed into a good garden plant, with pale green leaves and colorful fruit and flowers. It grows to 8 feet tall but is usually smaller. The tangle of thorny branches make excellent shelter for birds, and I’ve spotted many a nest by peering into a wild rose bush.

Rose hips are a renowned source of Vitamin C, and you can make an immune-boosting tea just by pouring boiling water over the red fruit. The hips can also be eaten fresh, though the inner bit is unappetizing, filled with seeds and strange stiff hairs. But the thin outer layer of flesh is tasty–I usually eat it by splitting the fruit open with a fingernail and scraping out the seeds. But this is labor intensive, and rose hips were never a significant food source for Native Americans. There was some medicinal use, though. A tea of wild rose hips was used to treat fever, sore throats and stomach aches–as well as to wash sores and sooth the pain of babies.

There are several different kinds of wild roses in California, and they all look fairly similar. The California rose (according to the Marin Flora) has the brown remains of its sepals at the tip of its ripe hips, and also tiny hairs visible on the stems of its leaves. It grows in full sun and partial shade, and in both wet and dry areas.

Filed under Edible, Good for gardens, Medicinal, Plant of the day

Plant of the day: salal

Salal is a familiar companion of the forest underbrush from Alaska to Santa Barbara. It is unadorned for most of the year, a simple shrub with largish (~4 inch) leathery leaves that dance up alternate sides of a slightly zig-zagged stem. In between the large veins, the leaves are traced with an intricate lacey pattern somewhat like the crease on the palm of a hand.

Small bell-shaped flowers of pinkish white appear at the tips of the stems in the early summer, and by now the dark purple fruit has ripened. Each berry is lightly hairy, and they are fairly sparse on the plant. Though edible, I have found them to be bland the few times I’ve tasted them. The leaves can be made into “a pleasant tea“, and poultices made of the leaves were traditionally applied to cuts, burns and sores. The fruit or leaves were also used to make dyes (of purple or yellow). 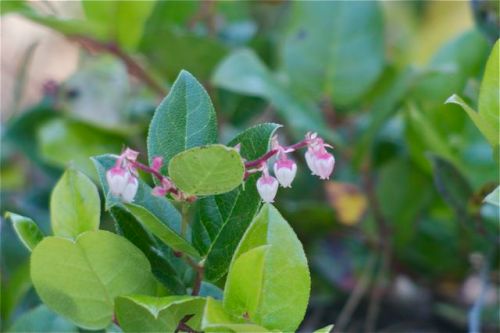