Plant of the day: ramping fumatory 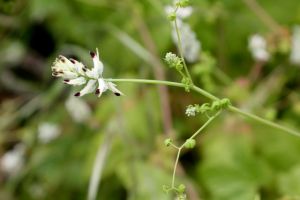 This twining, white-flowered plant seems unobtrusive but it is also very distinct. When I first saw it, I knew that I had never seen it before – and it turns out that isn’t surprising. White ramping fumatory (Fumaria capreolata) is a mildly invasive species that is slowly spreading throughout the state. I first saw it in Sutro Forest, and since have seen it regularly in Bolinas. Right now it’s only found in a handful of counties up and down California. The only other states it is found in are New York and Florida.

Its diminutive white blossoms are tipped with a dark brownish red, and delicate three-parted leaves are spread sparsely along twining stems. Despite somewhat pea-like flowers, fumatory is actually in the Papaveraceae family – a diverse group that also hold both poppies and bleeding hearts! 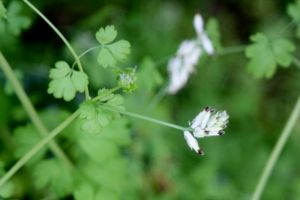