Plant of the day: wild carnation 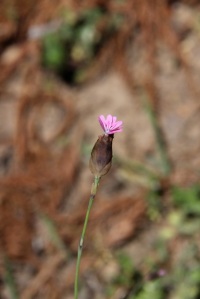 A single, brilliantly pink flower blooms atop a long slim stem. Each little petal is the color and shape of a valentines-day heart, with a second heart traced upon it in a line of dark fuschisa. Even more unusual, each flower looks like it’s emerging from a bulbous cocoon of papery bracts beneath.

This is wild carnation (Petrorhagia dubia), also known as windmill pink. Just like storebought carnations, this flower is in the Caryophyllaceae–or carnation–family. A good trick to tell that you’re looking at a species in this family is that the stem swells noticeably at the node where it joins the paired, linear leaves. Knowing the key diagnostic features of families, like this, is a good trick to have up your sleeve when you’re trying to key out a new plant! Some, like this one, are much easier than others.

Sadly, this striking plant isn’t native–you’ll see it growing in fields, roadsides and other disturbed habitats.

Plant of the day: western rasperry

A sprawling pale-stemmed bush is decked with dark purple raspberries. Warmed in the sun, they have a mild, rich sweetness. These tasty fruits are smaller, leaner, and much darker than their plump commercial cousins. I’ve always preferred the wild version!

There are many listed names for Rubus leucodermis  (western raspberry, white stemmed raspberry and whitebark raspberry) but I’ve always just called this “wild raspberry” since it’s the only native one around. It’s in the same genus as Himalayan blackberry, but though the plants are similar they are easy to tell apart even when not in fruit. Western raspberry is a delicate shrub with slim branches that have a glaucous coating which you can rub off with a finger. The leaves of both species are three parted, but blackberries’ are much thicker and darker.

Western raspberry is one of my very favorite California berries, but you won’t see it growing in Marin. Sonoma County? Yep. Santa Cruz? Yep. Even down to San Diego and up into Alaska. But for some reason it doesn’t like the San Francisco bay – there’s no record of it  in SF, Marin, the East Bay, or the Peninsula.

Filed under Edible, Good for gardens, Native, Plant of the day

Plant of the day: phantom orchid 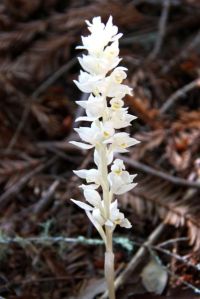 A stark white stalk of flowers catches a beam of sunlight in the woods of Sonoma’s coast range. This dense cone of blooms is completely white; the only color is a pale yellow smudge on each flower’s bottom lip. Phantom orchid, or Cephalanthera austiniae, is the only orchid in North America that has no chlorophyll at all.

No chlorophyll means it can’t make its own food, so the phantom orchid has to steal all of its nutrients from other plants. There are a variety of different ways that plants do this, but the phantom orchid uses fungi as go-betweens! There’s no direct contact between the orchid and its host plant (in this case, actually, the dead plants rotting on the forest floor). Instead, the tiny fibers of the fungus enter the roots of the host plant and pass nutrients along to them. I’m not yet sure what they get out of the deal, but it’s pretty nifty. The technical term for this is “mycoheterotrophic”.

As far as I know this striking orchid doesn’t grow in Marin, but you may see it when you’re hiking in Sonoma and the northern counties, or down in areas around Monterey as well. 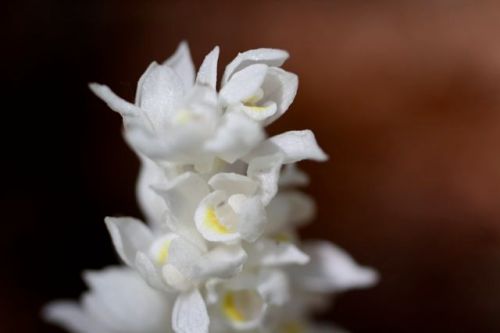 Plant of the day: wintergreen

Under the shade of a redwood grove, slender red stalks rise leafless from the duff. Flowers are scattered sparsely along the stalk, with those toward the bottom opening first. Five pink petals nod toward the ground. If you look underneath, you’ll see an oddly curved pistil surrounded by yellow-dusted stamen.

This is Pyrola picta, or wintergreen. I saw it in Sonoma County, but it grows in almost all parts of the state – and in all states as far east as South Dakota. There are other types of Pyrola, but none that have been found in the bay area. In many places it has a handful of dark green leaves at its base, but around here it is almost always leafless. It also is often white instead of pink.

Plant of the day: Ithuriel’s spear 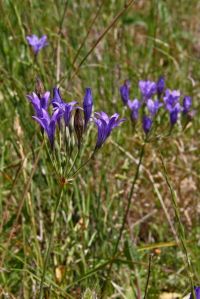 Here is another one of the lovely leggy lilies that I wrote about last week. Triteleia laxa sports a loose umbel of trumpet-shaped purple flowers. The color is usually the rich royal purple shown here, but it can be paler as well. The way to tell this beauty from the similar species is to look inside and see that it has six classic-looking stamens.

The young plant is spear-shaped when it first emerges from the earth. Evidently the name is (for you literary types!) a reference to Milton’s Paradise Lost, in which the angel Ithuriel finds Satan has approached Eve in the shape of a toad. Ithuriel touched him with her spear and revealed his true form. I think toads are beautiful and charismatic critters, and for me this is the best part of the fable – that a toad is what was chosen to infiltrate the ranks of goodness! 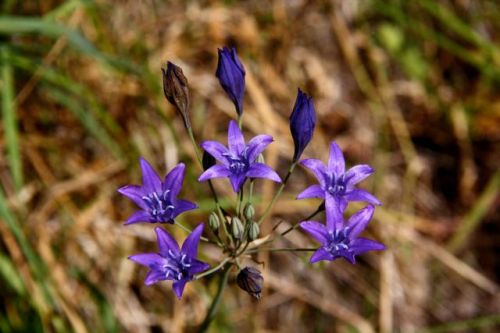 Plant of the day: Douglas’ sandwort

Douglas’ sandwort (Minuartia douglasii) is fairly common, but it’s so small you might never have noticed it before. It is strongly associated with serpentine, which is where I saw it.  The paired leaves clasp around the stem, and if you look close you’ll see that this joint (or “node”) is swollen slightly—it bulges out from the rest of the stem. If you’re keying plants, this is an excellent hint that what you are looking at is in the Caryophyllaceae, or pink, family. The common store-bought carnation is a common example of this family; so is the garden flower rose campion. Look at their stems to see how they all have the swollen nodes in common! 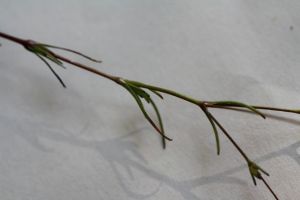 There are several other species of sandwort in the San Francisco Bay Area, but though they seem really similar in the key, they don’t look at all similar to this one in their actual growth form. At least not as far as I can tell. But I might have to wait until a while to keep looking for different growth forms – I took these photos of the sandwort about a month ago, and they are now pretty much done blooming. We might not be seeing any more until next spring. 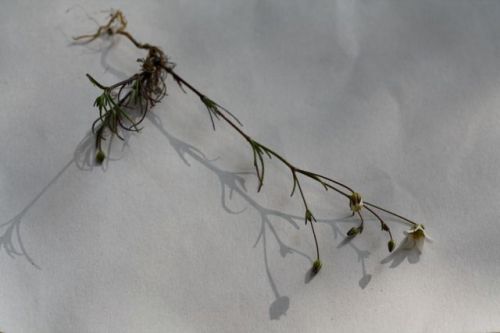